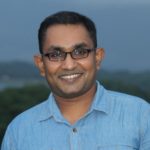 The Sri Lankan author PRAMUDITH D RUPASINGHE is considered one of the emerging authors of our times. His books have sold worldwide, have been released internationally and been translated into several languages. Born in Gampaha, Sri Lanka in 1979, he soon discovered his vocation for writing though he still works in the humanitarian sector. As a humanitarian diplomat, he has served in several countries around the world by contributing to his specializations 'Mental Health-Psychosocial Support, Disaster Risk Management, Peace-building and Social Behavioral Change Communication' to almost every major calamity in past decades such as South Asian Tsunami, Sri Lankan civil conflict, Haiti earthquake, Pakistan earthquake, The great lake crisis, Liberian civil conflict, West African Ebola crisis, Nepal earthquake, Rohingya crisis in Northern Rakhaine State in Myanmar, and Rohingya Refugee Crisis in Bangladesh. He began to follow the 'Semi-Fiction' genre with his title 'Footprints in obscurity`, andhis title 'Behind the Eclipse- The unheard from the West African Ebola Crisis' has been listed as one among the best ten books written by Sri Lankan authors all time, by pulse magazine.Pramudith has several other significant works such as: 'Rain of Fire', 'Termites', and 'Bayan'.He is present in all social media networks, and he is a writer with a significant number of followers in the social media.In the past years, Pramudith D Rupasinghe has expanded his presence on the internet and printed press.